What is a table view?¶

A Python class that describes how to display data in a tabular way, i.e. using cells arranged in rows and columns.

In a Lino application you describe table views using Python classes. These Python classes are a general description of how to lay out your data and can be used for different front ends. The same table description is used to render data interactively as a grid panel or on a printable document as a table.

Lino's "table views" are roughly equivalent of Django's "views". With Lino you don't need to write views because Lino writes them for you. Actually a Lino table view corresponds only to one type of Django's views, sometimes referred to as "tabular" or "list" views. The other class of views are "detail" views, for which you are going to define Layouts (we'll talk about these later).

The remainder of this tutorial concentrates on database table views, virtual tables have a tutorial on their own.

To illustrate this, we will have a look at the lino_book.projects.tables demo application.

Here are the database models:

And here are the table views:

Tables must exist in your models.py, in the same namespace as your database models. But you might prefer to actually define them in a separate file and import them into your models.py by saying:

We recommend to name such a file ui.py. Note that using a desktop.py file is deprecated.

Table views are subclasses of dd.Table. You don't need to instantiate them, Lino discovers them automatically at startup and they are globally available at runtime in the lino.api.rt module.

Much information about your table view is automatically extracted from the model: the columns correspond to the fields of your database model. The header of every column is the verbose_name of its field. The values in a column are of same data type for each row. So Lino knows all these things from your models.

The rows of a table can be sorted and filtered. These things are done in Django on a QuerySet. Lino forwards them to their corresponding Django methods: order_by, filter and exclude.

But here is something you cannot express on a Django model: which columns are to be shown, and how they are ordered. This is defined by the column_names attribute, a simple string with a space-separated list of field names.

Table views can hold information that goes beyond a database model or a queryset. For example we set hide_sums to True on the Books table because otherwise Lino would display a sum for the "published" column.

Table views may inherit from other tables (e.g. BooksByAuthor inherits from Books: it is basically a list of books, with the difference that it shows only the books of a given author.

As a rule of thumb you can say that you need one table view for every grid view in your application. Each table view is a subclass of dd.Table.

To define table views, you simply need to declare their classes. Lino discovers and analyzes them when it initializes. Table views never get instantiated.

Each table view must have at least one class attribute model, which points to the model on which this table will "work". Every row of a table represents an instance of its model. (This is true only for database tables. Lino also has virtual tables, we will talk about them in a later tutorial.

Since tables are normal Python classes, they can use inheritance. In our code BooksByAuthor inherits from Books. That's why we don't need to explicitly specify a model attribute for BooksByAuthor.

Lino manages this dependency almost automatically. The application developer just needs to specify a class attribute master_key. This attribute, when set, must be a string containing the name of a ForeignKey field of the table view's model.

A table can define attributes like filter and order_by, which you know from Django's QuerySet API.

The columns of a table view¶

An important attribute of a table view column_names, which describes the columns to show.

A string that describes the list of columns of this table.

Default value is '*', which means to show all columns.

Lino will automatically create a lino.core.layouts.ColumnsLayout from this. This string must not contain any newline characters because a ColumnsLayout's main panel descriptor must be horizontal.

If given, this is specifies the data elements that should be hidden by default when rendering this table. Example:

Value : Application code should specify this as a single string containing a space-separated list of field names. Lino will automatically resolve this during server startup using lino.core.utils.fields_list(). The runtime value of this attribute is a set of strings, each one the name of a data element. Defaults to an empty set.

Inheritance : Note that this can be specified either on a Model or on a Table. Lino will make a union of both.

The asterisk ('*') in a column specifier is a wildcard and means "insert at this point all columns that have not been named explicitly". It can be combined with explicitly specified names. These wildcard columns

If '*' is not present in the string, only explicitly named columns will be available.

specifies that name and owner come first, followed by inserted columns and finally by date.

Virtual fields are not included as wildcard field unless they have lino.core.fields.VirtualField.wildcard_field set to True. This rule is for performance reasons. Some virtual fields a rather heavy (e.g. the navigation_panel must query the whole database to get all primary keys), and even when they are hidden, Lino has to include wildcard fields in the result because the end user might have enabled them.

But the table is even more than the description of a grid widget. It also has attributes like detail_layout, which tells it how to display the detail of a single record in a form view.

Using tables without a web server¶

An important thing with tables is that they are independent of any front end. You define them once, and you can use them on the console, in a script, in a testcase, in a web interface or in a GUI window.

At this point of our tutorial, we won't yet fire up a web browser (because we want to explain a few more concepts like menus and layouts before we can do that), but we can already play with our data using Django's console shell:

The first thing you do in a shell session is to import everything from lino.api.shell:

This imports especially a name rt which points to the lino.api.rt module. rt stands for "run time" and it exposes Lino's runtime API. In our first session we are going to use the show method and the actors object.

So here is, our Authors table, in a testable console format!

And here is the Books table:

These were so-called master tables. We can also show the content of slave tables :

Before going on, please note that the preceding code snippets are tested as part of Lino's test suite. This means that as a core developer you can run a command (inv test in case you are curious) which will parse the source file of this page, execute every line that starts with >>> and verifies that the output is the same as in this document. If a single dot changes, the test "fails" and the developer will find out the reason.

The last piece of the user interface is the menu definition, located in the __init__.py file of this tutorial:

Every plugin of a Lino application can define its own subclass of lino.core.plugin.Plugin, and Lino instantiates these objects automatically a startup, even before importing your database models.

Note that a plugin corresponds to what Django calls an application. More about this in Introduction to plugins.

Explore the application and try to extend it: change things in the code and see what happens.

You can interactively play around with the little application used in this tutorial: 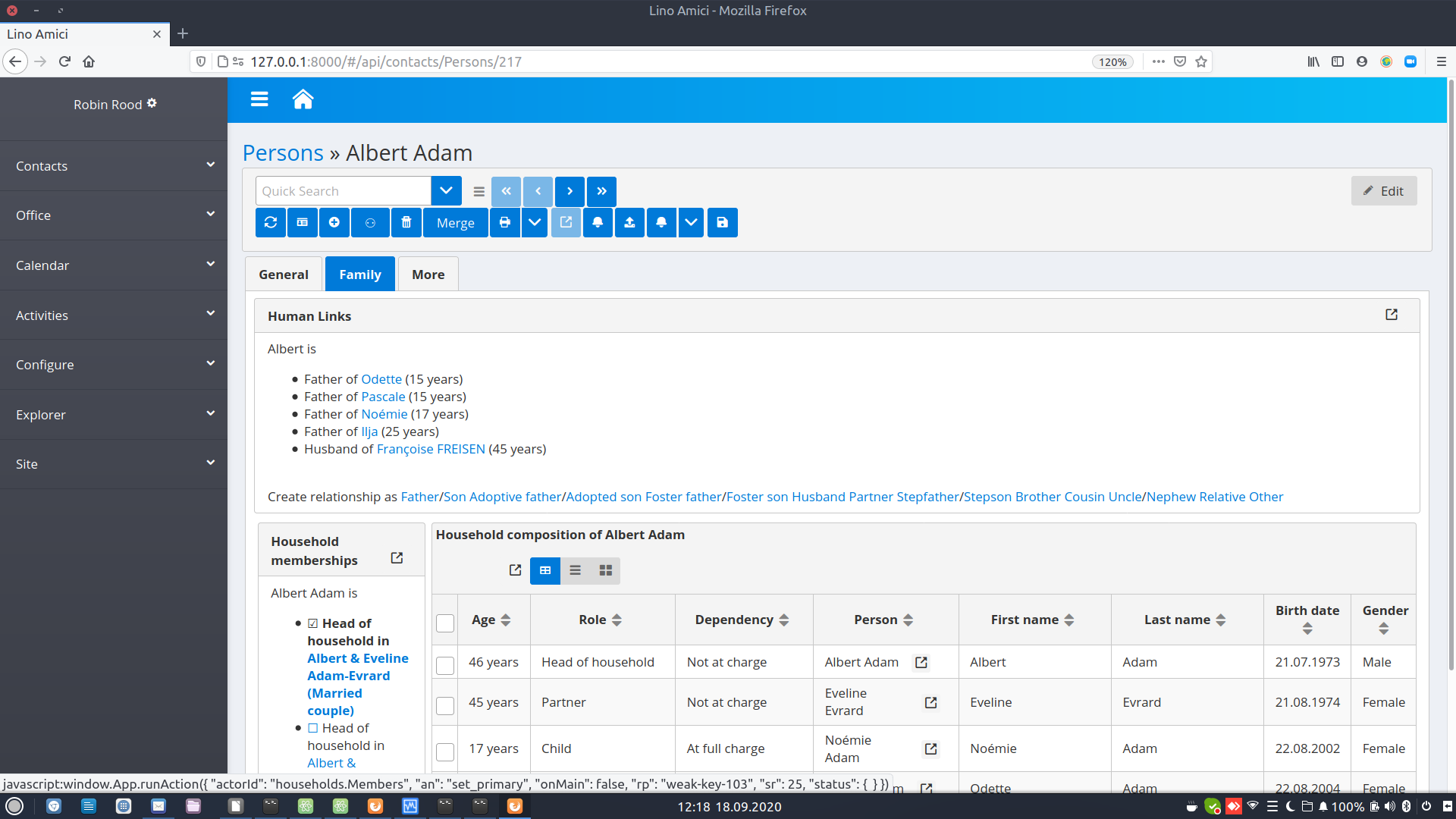 The fixtures/demo.py file contains the data we used to fill our database:

A data element that has been inserted by a * and which is hidden by default. See Wildcard columns.

A database field that is candidate to becoming a wildcard column.